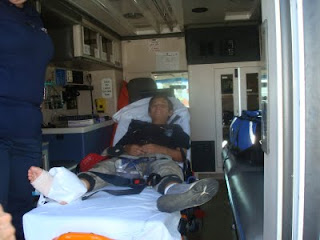 This past weekend of September 12 & 13 was our team's 4th WKA Regional Race weekend.
The track was the 1.1 mile circuit at NJ Motorsport Park in Millville.
During one of the final heat races on Sunday Tazio had an accident. While he was battling for position the tires on the two karts touched. Tazio's kart went up in the air and he was thrown out of his seat. When he landed on the ground he got up right away just to realize that his foot couldn't hold his weight and went down again. The race was immediately red flagged and stopped. I ran to him right away escorted by the track director. The track ambulance arrived immediately and the response was very professional. While Tazio was being checked His Mom Lucia was brought on the scene by one of the track workers. The ambulance took us at the Track medical center where Tazio was checked by a race doctor. The doc said the foot was either fractured or sprained, and that Tazio was otherwise OK. 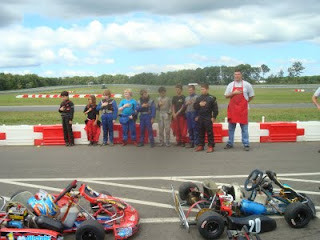 When the ambulance brought us back to the kart track pits all his fellow racer kids were clapping and cheering as Tazio came out. It brought a big smile to his face, I think it was special moment he will never forget. Tazio didn't want to leave, he wanted to sit track side and watch his friends race in the two final races. He was very disappointed he couldn't race in the finals.
The next morning after some X-rays, Tazio's doctor said nothing was broken. Fortunately he only sprained the top of his right foot. He already started walking since Tuesday morning and getting better very rapidly. Our next race is not until October 11th which will give him plenty of time to heal 100%. I also need the time with Dario's help to check, fix and prepare the kart. Tazio's said he didn't get scared from racing but definitely learned from it. 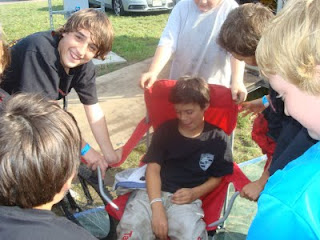