After our WKA Regional Event at NJ Motorsport Park on September 13, our racing team had a month break, which we very much needed to repair and rebuilt the kart, and for Tazio's foot to heal, which after a couple of soccer games it proved to be perfect. 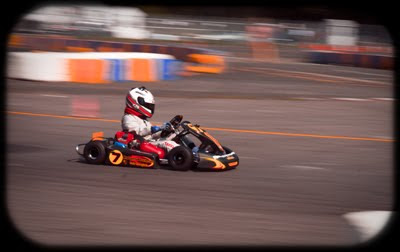 We came back to track at Englishtown on October 11 for the next Raceway Park Club Race. For the first time the track was run backwards which was like racing at a new venue. On Saturday they had open practice all day for drivers to learn the new track. We couldn't make it.

The time during the break really gave me the chance to take the kart all apart, clean it and put it all back together. When I was done it felt like a new machine. When Tazio hit the track first thing in the morning for the first practice session he was fast out of the box.

The great Mike Doty helped us tune the kart which made our lap times drop each session. Tazio managed to qualify fifth out of fifteen.

In the feature race he had a great start, stayed out of trouble and was able to finish fourth. He wasn't able to catch the top three but was able to open a large gap to everyone else behind him. The three that finished on front of Tazio were among the drivers that practiced on Saturday. 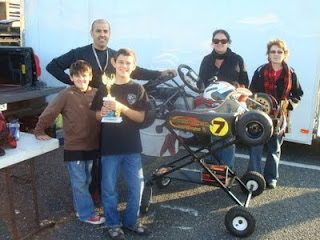 We were happy with the result. Watching Tazio's face pick up his fourth place trouphy showed us that his accident didn't slow him down.