After a strong overall performance and exceeding our expectations in our first WKA Regional Season, Tazio is set to drive in our first WKA National Race Weekend.
It's the legendary Daytona Kartweek on December 28-30, 2009. The first race of the 2010 WKA Manufacturer Cup National Championship. Tazio at 11 years of age on 12/13/09 will be competing in Cadet class. He will race in a field of 50 + national level drivers expected to be the best in the country. We don't expect to be running at the front on our first National race. We do believe that Driving together with this level of competition will sharpen Tazio's race craft to the next level. We are thrilled to race in the legendary Daytona International Speedway, home of the Daytona 500 and the 24 hours of Daytona. 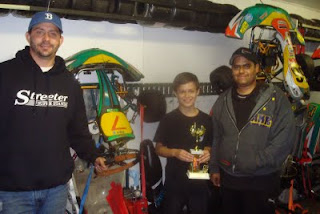 We will join forces with the Mike Doty Racing Team. Mike Doty, a karting champion himself, coached many drivers to victory, including National Championships. Mike Doty will be looking after Tazio and his chassis together with another great tuner/coach, Mike "Chi Chi" Ramirez.
Last Sunday we were at Englishtown NJ for a club race. Doty had Tazio drive one of his Merlin chassis in trying to prepare and figure out the right kart to use for next month. The Merlin is much newer than the worn but fast Nevoso kart we have been using. Setup wasn't easy with a damp drying track during practice. But in no time after making some key changes Tazio's lap times continued to drop. In the final race after a great start from the third row, Tazio pushed the two karts on front of him hard and finished fourth with an unfamiliar Merlin chassis. He was able to gain ground in the club points standings with his two closest rivals. He definitely had the speed to run in the top three. Another trophy for the collection. 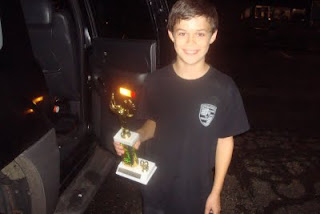 This Sunday November 22nd will be our last race of the 2009 Raceway park club season. Chi chi wants Tazio to drive the Merlin again to become more familiar with it. Tazio thought the rear was a little tight, so we need to free it up a bit and hopefully find more speed. Our other half of the team Dario and my wife Lucia couldn't make it as they were both under the weather.
They're better now.
Posted by Patrizio at 11:00 PM No comments:

Strong Podium in the Wet locks top Five in Points 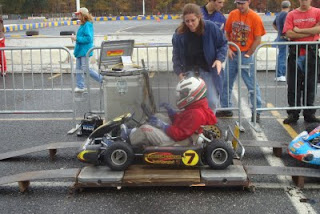 October 24th and 25th was the last race weekend of the 2009 WKA New Jersey Sprint Series. Fortunately for us the forecast for Saturday all day rain was accurate. I had changed the chassis set up for the wet to find grip in a slippery damp track. Tazio's first race teacher Mike Doty pointed out that our old rain tires needed replacement to be competitive. We took his advise and got it done with Dario's help (Tazio's brother).
Tazio was immediately among the fastest in the wet. He was able to win his first WKA regional heat race and two podiums in the finals for Cadet and Junior sportsman classes.
He tangled with another kart at the start of one of the heat races which dropped him to the back of the pack.  His fast laps and careful driving enabled him to stay on the track and catch most of the field (click here to see the video).
By the end of the day Tazio was soaked, but also very happy to pick up his two large 2nd and 3rd place trophies. 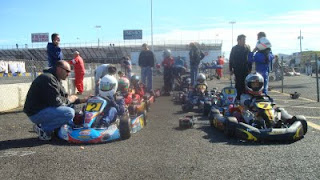 On Sunday it was sunny and dry. It took us a while to find the right set up. He couldn't finish one of the heat races because of a loose wheel. He was smart to notice and stop before loosing the rim all together. I took the blame. This didn't help his qualifying which resulted in a sixth starting position. He finished his last race of the weekend fifth, however a well earned fifth with a brilliant last lap pass on his rival. Dario was of great help to the team changing the set up between sessions on both days.

After a brilliant drive in his first WKA Regional Series and and a racing accident which forced him to miss two finals, he was able to finish fifth in the points in both Cadet and RP Junior Sportsman classes. This makes Tazio an award recipient at the end of season banquet in December.
We'll be back at Englishtown on November 15th for the next Raceway Park club race.
Posted by Patrizio at 9:33 PM No comments: