Tazio Grabs both Cadet Wins in NJSS Last Round 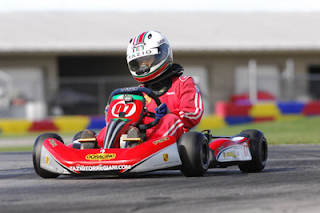 On October 15th and 16th, 12 year old Tazio Torregiani entered in the final round of the 2011 WKA Divisional New Jersey Sprint Series. This was to be Tazio's last race weekend in a Comer 80 powered cadet, as next year he will move up to the Junior class. The race took place at Raceway Park, in Englishtown NJ, only this time in backwards configuration. Tazio also raced in Yamaha Sportsman class, clutch problems kept him from finishing better than third. But it was to be in cadet class that Tazio was unstoppable. In the first cadet final race on Saturday, Tazio passed for the lead with three turns to go on the last lap, and managed to lap a driver with two rivals on his tail. One of the other drivers got alongside of him, but Tazio stayed on the gas and dove in the last turn on the inside keeping the lead all the way to the checkered flag. "I passed for first.. I got it.. and going into the last turn I held my line and got the turn..and than I got the win" said a very happy Tazio right after the race. You can see a video of this race at the following link: http://youtu.be/QSa8qBcbFQU?hd=1.


In the second cadet final on Sunday, Tazio passed for the lead with two laps to go and defended hard all the way to a wheel to wheel drag race to grab back to back wins in cadet. The Fairfield county racer has been driving in the comer/cadet class since he was 8, and this was the best way to end it. The TazioRacing.com team would like to thank Doug Fleming for his help and support with Tazio's comer motors. Torregiani in November will join Mike Doty Racing in his biggest race yet, the Supernationals at Las Vegas. This is one of the biggest kart races in the world, and it will be Tazio's last race in cadet class, with a mini rock motor.
Tazio Torregiani would like to thank his sponsors NewCountryPorsche.com, GoPro, Leatt and Fuel Clothing.
To follow Tazio and his team like his fan page at: http://www.facebook.com/pages/TazioRacingcom/248819618492981.