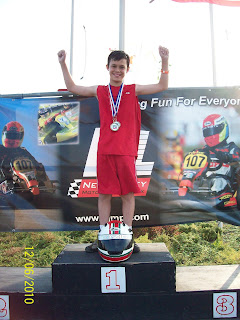 The Following is the press release from Ekartingnews.com:
The WKA New Jersey Sprint Series returned to NJ Motorsports Park on June 11th, 12th and 13th for round two of the 2010 Series. The one mile Tempest track is very fast and one of the best kart tracks around. Good enough for the WSK World Kart Series coming in July.

This is also the same track where last year Tazio flew out of his cadet kart in a racing accident, which left him with a minor foot injury for a week.
On Friday, during open practice, Tazio very quickly got into his groove turning very competitive laps. His great feedback enabled his father Patrizio Torregiani find the right chassis set up with the help of Mike Doty, one of the best tuner/coach in the country.
On Saturday, Tazio’s pace kept getting better. After a brilliant drive in the qualifying heat races, he placed his Merlin cadet kart in 2nd place starting position on the grid for the feature Cadet final 1 race.
A great start saw him jump in the lead into turn 1 only to fall in third place shortly after. But Tazio knows races are not won on the first lap, so lap after lap he made sure he didn’t lose sight of the two karts on front. Bump drafting is a big factor at this track because of the long and very fast front straight, especially in cadet class. So when the two front karts started pulling away in their own draft, Tazio alone needed help. He frantically started tapping the back of his helmet signaling the kart behind to step on it and give him a push. Now with a drafting partner they very quickly reeled in the leaders. Time was running out so on the last lap coming out of turn one, Tazio went for the double pass and jumped from third to first, ironically the exact spot where his accident happened last year. Eleven year old Tazio Torregiani managed to hold on to the lead to the checkered flag holding off a last charge from the pole sitter, side by side in a marvelous photo finish. It was Tazio’s first regional win of the year. 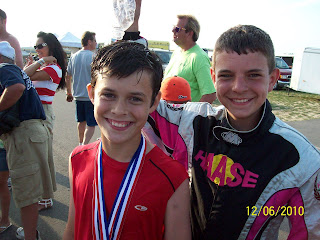 On Sunday the weather was much hotter and humid, which didn’t favor Tazio’s kart setup. He finished fourth.
Tazio will race at Road America WI on July 10th and 11th for the third round of the WKA Manufacturer Cup in the Zoom Zoom Grand Nationals.
You can follow Tazio on his website at http://www.TazioTorregiani.com
Posted by Patrizio at 10:33 PM No comments: