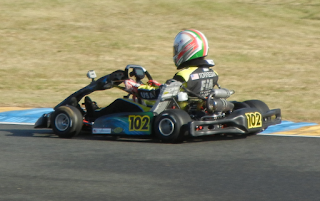 The second round of the 2012 CIK FIA Karting Academy trophy, in Angerville France, just came to an end this past weekend. It was an incredible experience. The track was beautiful and in great conditions. It took Tazio no time to learn the circuit. Each practice session on Friday he progressively kept getting better and faster.
On Saturday morning the day started with a wet track, but by the time it was the academy drivers turn to go out, the track was dry. Tazio went out for morning warm up practice, and was able to put it all together. He was the fastest driver for most of the session and was driving great, his pace fell off a bit in the final laps but was still 7th fastest in the morning warm up. In qualifying Tazio was on a charge, and his times were dropping lap after lap, but with just two to go, his Fim KF3 motor started cutting out coming out of the turns, so by the end he qualified 17th in his group. The Parolin mechanics checked their motor and changed Tazio's carburetor. Just when we thought we had the problem solved, Tazio's worst nightmare became real. In the warm up lap of his first of three heat races, his engine would dye before the start with what seemed an electrical problem. This pretty much decided our weekend. In the second and third heat races, Tazio drove better than ever and finished 13th and 14th respectively. 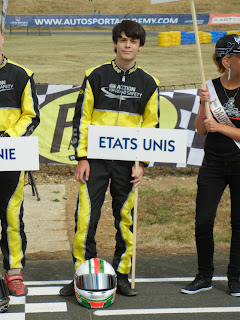 All he needed was to finish his first heat race in 14th place to make the final A races, but his engine let him down. This meant he would race in the Final B race. He started 9th out of 15 drivers and got a great start, started attacking and climbed up to 4th. Just as he was catching third place, he went a little two wide coming out of turn 2 leaving his door open, which allowed two drivers to dive in. Tazio finished his final in 6th place. The best part was that his fastest lap in the race of 53.6 was fast enough to finish in the top 10 of the final A races, and it was clear that this is where he belonged.
Not only was Tazio fast on the track, but he was also fast in the Edukart test, where he answered all 25 questions correct, and finished 4th fastest out of all Academy drivers, missing out on the Edukart podium by one position.
After two rounds of the Academy Trophy, you can really tell how much Tazio is learning from it, he is really coming in as a driver and you can notice his confidence growing on the track.

Posted by Patrizio at 9:44 AM No comments: