Tazio Torregiani Featured on the Online Newspaper The Daily


Do not confuse go-karts with those Little Rascals-esque plywood toys on wheels. Tazio Torregiani, an unassuming 12 year-old with race cars in his blood, is way beyond such child's play.
Tazio's professionally manufactured if diminutive racecars, known in racing circles as "karts," are the real thing. Which means they go very fast, something eminently appealing to him. "What I like most about racing," says Tazio, "Is the thrill you get going 60 miles per hour."
His father Patrizio himself has a thirst for speed. Once a racecar driver, he is now a sales specialist and Internet manager at New Country Porsche in Greenwich. Patrizio was captivated at an early age by his father's Porsche 911 in Rome, Italy, where he grew up.

The Torregiani family lives a traditional life in Stamford -- but for the driveway's permanently residing trailer that houses Tazio's two racing karts. Tazio, who has a 10 year-old brother, Dario, plays soccer and does his homework just like any other pre-teen boy. The difference, however, is in his far-from-regular weekends. Tazio trains and races year-round both regionally and nationally on tracks as near as Englishtown, NJ and Mount Kisco, NY, and as far away as Daytona Beach, Fla. But he manages to keep focused on the track while staying ahead of his schoolwork. "Karting is hard physically and mentally," he says.

Tazio began racing at the age of six. His family was vacationing in Portugal (where Tazio's mother grew up) and the family visited an outdoor kart track. Tazio's talent was soon realized. "He just stepped on the gas and took off," Patrizio recalls. "He was a natural. As we were watching him lap the track the owner asked me how long Tazio had been driving. I told him it was his first time, and he told me I should get him a kart."

When they returned home, Patrizio did just that, and Tazio began racing -- and winning -- soon after. He's been successfully doing so ever since, flying along in races with up to 34 other karts, on tracks at upwards of 60 miles per hour. And if that doesn't exactly evoke Formula 1, G-force-pulling speed, remember the open vehicle is just one inch off the ground and only five feet long. But that doesn't seem to bother Tazio. "The most challenging aspect of racing is when you are on the track, thinking of what your next move is and how you are going to execute it," he says. Tazio intends to race at Grand Prix New York this winter at select races on Sundays.

Patrizio says Tazio "doesn't just race casually, he takes it very seriously. He's very fast and very determined." And Tazio is resolute about steering his driving into professional echelons. "I want to be a Formula 1 driver," he states matter of factly.

"It was my wife's idea to name him after the great Tazio Nuvolari," says Patrizio, referring to Italy's "Flying Mantuan," among the greatest Grand Prix drivers of all time.

Tazio has certainly gotten a head start in his race toward racing greatness. But for now, he looks forward to getting his learner's permit in a few years, just like any other 12 year-old kid.
Posted by Patrizio at 9:57 PM No comments: 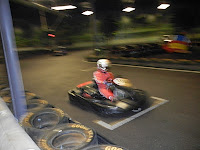 12 Year old Tazio Torregiani will race at Grand Prix New York this winter at select races on Sundays. Tazio is an outdoor sprint kart National racer, but racing at the local indoor track in Mount Kisco NY gives the CT karter a convenient opportunity to stay active and sharp as he prepares for his next big WKA race in South Carolina in March.
the karts here are different. They are bigger and heavier and are powered by a four stroke engine versus the lighter two stroke power Merlin karts he drives outdoor. The racing here however is no walk in the park for Tazio. Passing is very difficult in the very tight indoor tracks, and he races against the strongest group where the fastest are 15 to 16 year old. To make the racing fair Tazio has to add 50 lbs ballast weight to his kart to match the weight of the heaviest drivers in his group. 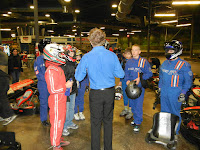 The first race of the Junior winter series was Sunday January 9th. In the closing lap of qualifying Tazio secured Pole Position, and in the third and final race Tazio made his move with a last lap pass and won the race.
In the second round on 1/23/11, Tazio went for a difficult pass that didn't work which kept him from winning. He did however secure fastest lap of the race which awards bonus points.
Tazio is currently leading the indoor points standings and will be back at GPNY on 2/6/11.
Posted by Patrizio at 10:51 PM No comments:

December 28th-30th 2010.
The TazioTorregiani.com Racing Team returned to the annual Daytona Kartweek in December just after Christmas. The 2011 WKA Manufacturer's Cup National Sprint Series starts here, at the famed Daytona International Speedway. This time the challenge was going to be the strongest for the team with record entries from all over North America.
Sportsman driver Tazio Torregiani arrived on a high, after being one of the fastest national drivers at the closing WKA round in Melville, NJ, and qualifying on the front row.
Tazio entered the Daytona Race with two Merlin/Fleming karts for three different classes: Cadet, Yamaha Sportsman light and heavy. This was the first time for Tazio to race in National Yamaha class.
In open practice Tazio was fast right away, setting some really quick laps especially in Yamaha class.
But it was in Cadet that things were going to look better.
50 National drivers attempted to qualify for only the 34 spots that would take part in the final races.

Tazio qualified 15th overall and made the race as expected. In the pre-final race he fell to 17th at the start, but quickly fought his way back and finished 14th. This would be his starting position on the grid for the Final. In the main race Tazio got a clean start and engaged in one of his best battles including a last lap pass that gave him his tenth place finish. You can see the on board video of this race by clicking here.
On race day 2 Tazio went better in Cadet qualifying to a 12th position, and moved up to 9th in the prefinal race. In the Final 2 race Tazio was very fast out of the box and was able to climb as high as 6th. Unfortunately by that time there was so much rubber on the track, that a tire pressure miscalculation gave Tazio's kart too much grip mid race, which developed a bad under steer. He was still able to finish 11th out of 34.
In the Yamaha Sportsman class Tazio was very impressive as a rookie, qualifying his Merlin/Fleming kart in 8th position out of 52 National entries. To Tazio's disbelief, he was disqualified after not making the minimum 260lbs weight by three pounds.
On the second day, traffic in qualifying and a kart loosing a wheel on front him in the race, kept Tazio from finishing better than 22nd out of 34.
Overall Tazio made it clear that he was part of the top ten fast group in National Man Cup.
Fairfield County race driver Tazio Torregiani plans to stay active, by entering select races at GPNY indoor karting in MountKisko NY, in the junior winter league. In preparation to the next National race in March.
The www.TazioTorregiani.com Racing Team would like to thank his sponsors and supporters including
http://www.newcountryporsche.com/, http://www.vincentgarage.com/ , and http://www.mikedotyracing.com/ .
Posted by Patrizio at 10:23 PM No comments:

You're on board with Tazio Torregiani as he battles his way through the field to a top ten National Finish at the legendary Daytona Kartweek. This is the WKA Manufacturer Cup Sprint series in Cadet class on December 29th 2010. The fast racer #80 is the son of Indy 500 winner Buddy Lazier. Great action.

Posted by Patrizio at 9:34 PM No comments: